I like brackets. Both in light of their orthographical purpose, and of the corresponding implications on real life. Brackets are a way of delineating an entity on its own that remains embedded in and in a way dependent on a larger context. A very good concept. So, to give you an example of kitchen alchemy, you may start a luncheon with oysters and finish it with oysters (the brackets), having a number of separate courses in between (the entity), with the simple aim of enjoying yourself (the larger context). How is that!

The famous R-months are back, the oyster months. It’s an old rule of thumb to have oysters only during months that contain an R. In French. I’ve often wondered why this is. One reason seems to have to do with protecting the oyster banks from overexploitation. But far more likely, in my opinion, is the conditions under which oysters had been transported outside the colder seasons. Which is, after all, the months without an R in French. Big chunks of ice were brought in from ice caves, remnants of the glacial period, methuselah ice spared under peculiar geographic conditions. We once visited one in the Jura, in high summer, it felt like a journey to the arctic, a descent to another world.

Nowadays nothing really speaks against having oysters in summer, except perhaps that they’re too thick. But you just might get them a size smaller, this is what we usually do.

Now, my friends, while oysters as a starter just sound the very thing, you may wonder a little how possibly one could suffer oysters for dessert. Ha. I’ll tell you: it’s meringue oysters! Filled with sweet whipped cream and sip of mirabelle eau de vie. And this is how it goes: 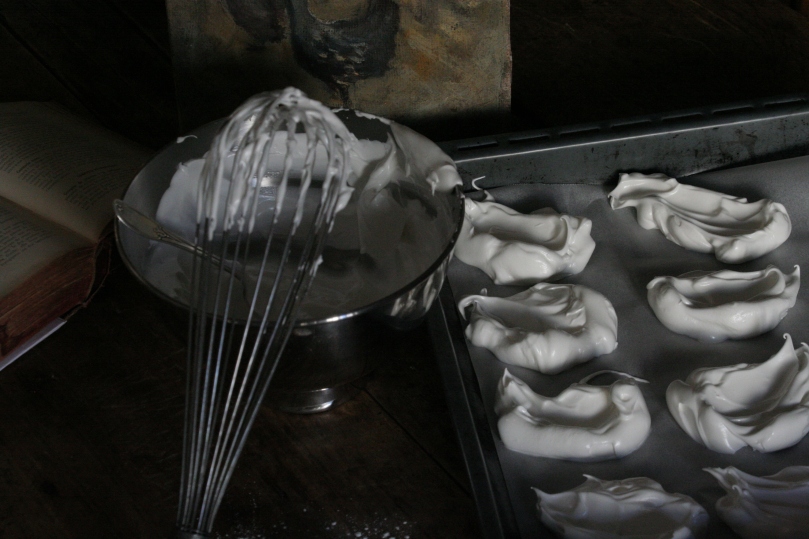 One egg yields about two oysters, say size three. Separate the yolk from the egg white. Take about 30 grams of sugar per egg. Add the sugar to the egg white and let it soak at (a cool) room temperature for a couple of hours. Then whip until you get a very firm mass, Marie Antoinette hairstyle texture etc (for those of you who are not (yet) familiar with my blog, egg whites are whipped to satisfaction whenever they are suited to be towered up on your head like Marie Antoinette’s hair).

Throw an egg shaped dollop on a baking sheet. With a spoon, pull through the mass thus creating an uneven void in the middle, making it look like the bottom of an oyster. For the tops, throw half the quantity and shape them like oyster lids using a spoon.

Bake them, oven door slightly ajar, at about 80°C for at least 2 hours. The meringue is done as soon as they won’t stick to the baking paper. Keep them in a well sealed box when they’ve cooled out to avoid the meringue drawing moisture from the air. 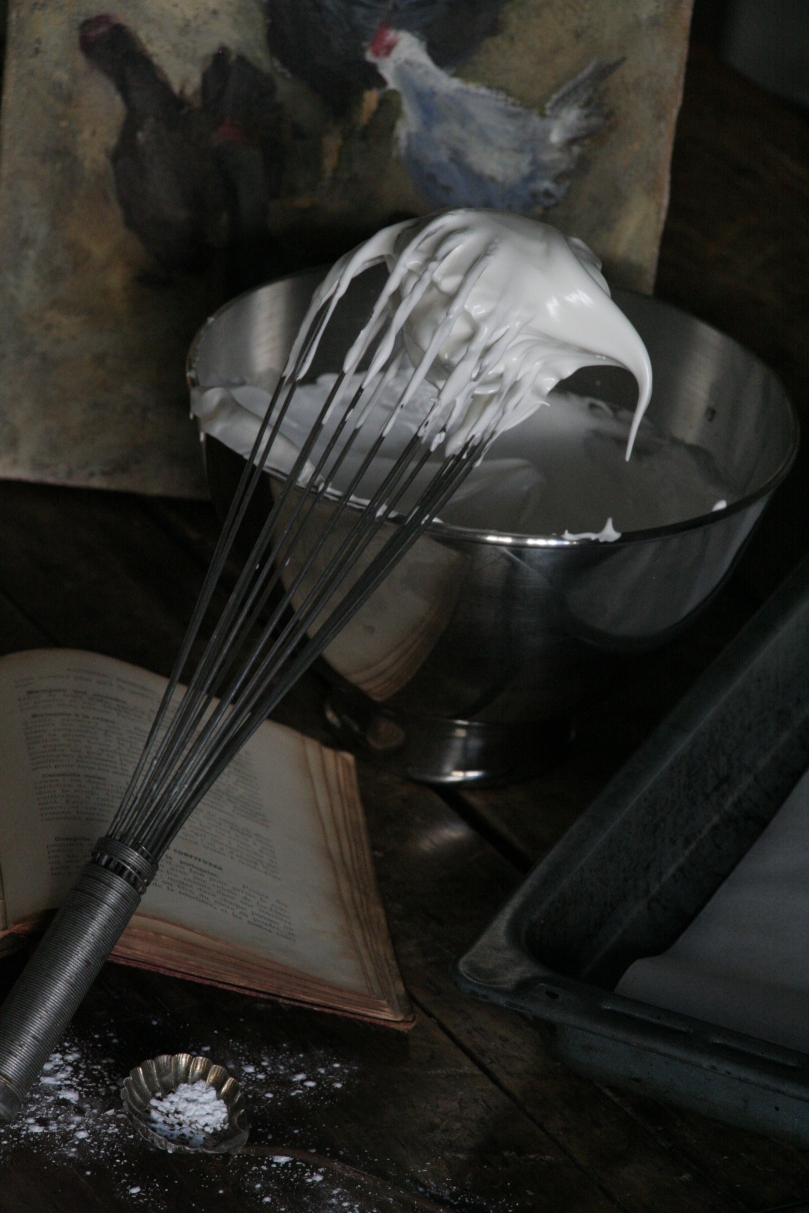 Add a teaspoonful of sugar per decilitre of cream, whip until firm and take care not to make butter. Add a sip of eau de vie de mirabelle (you might as well take kirsch, or armagnac liquor) and stir well.

Serve with a glass of macvin du Jura. 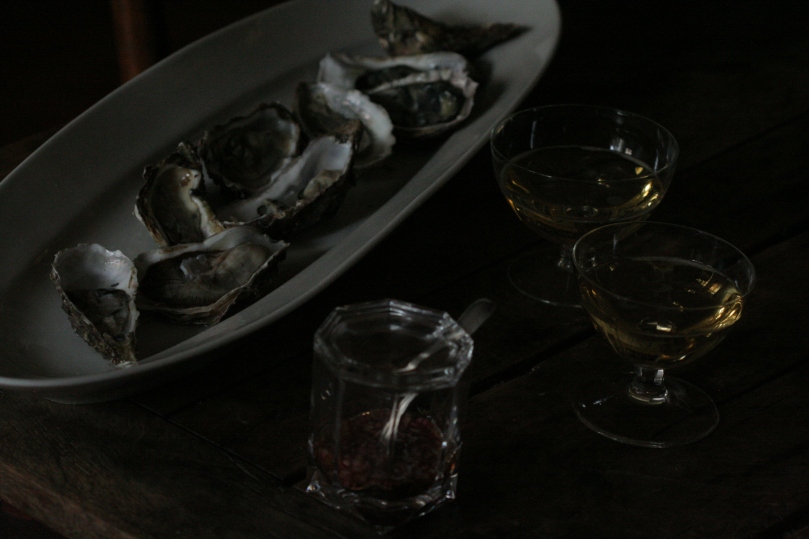 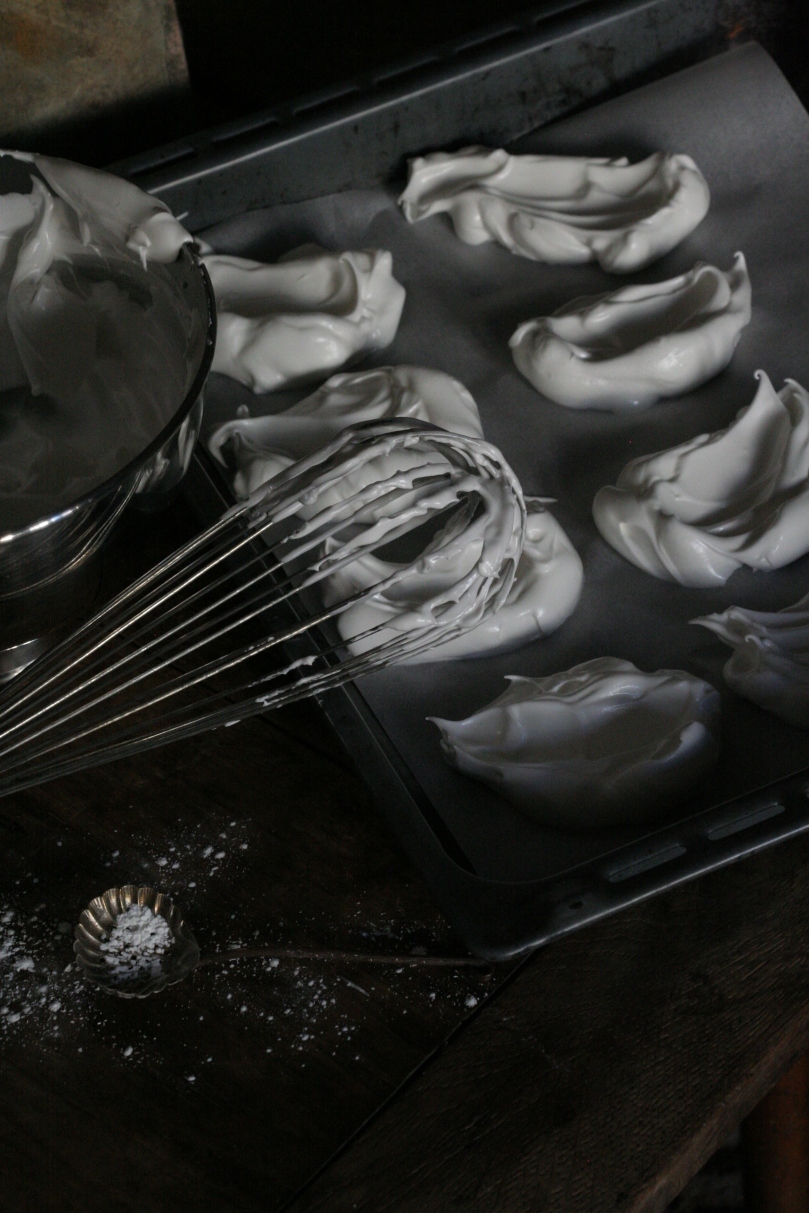 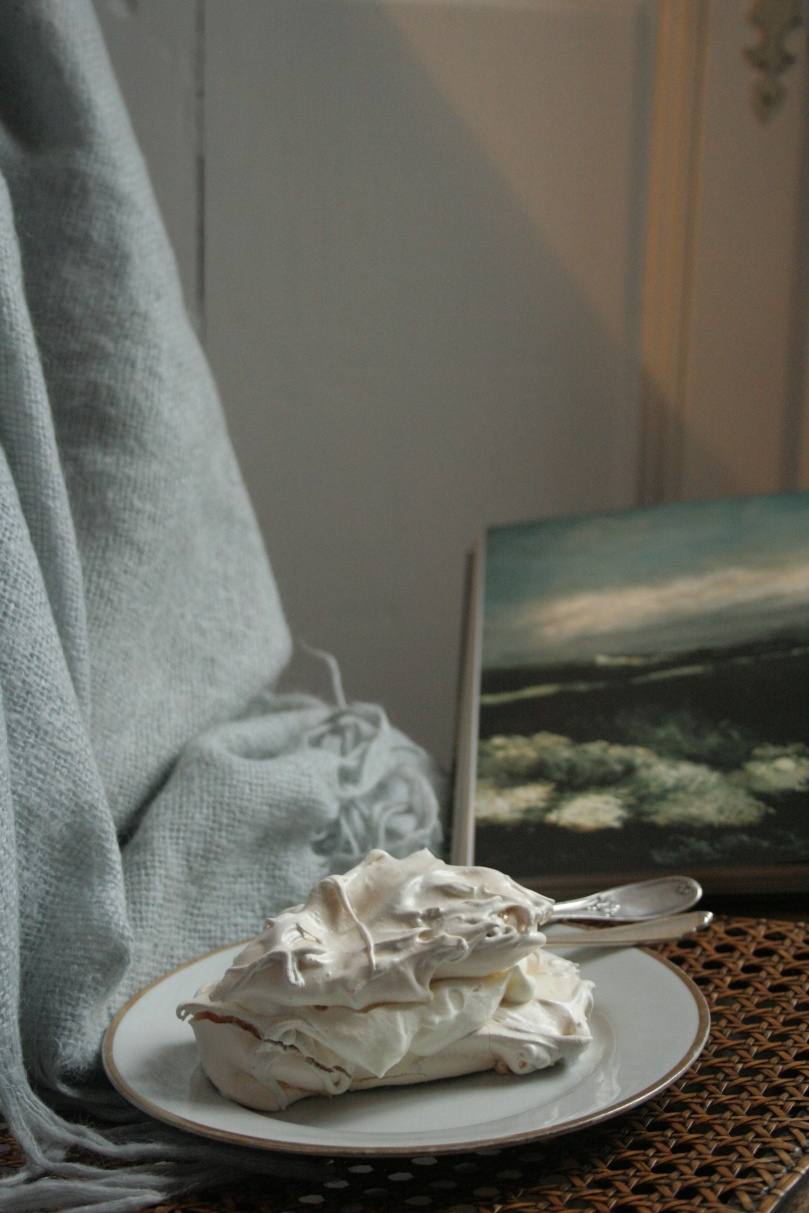